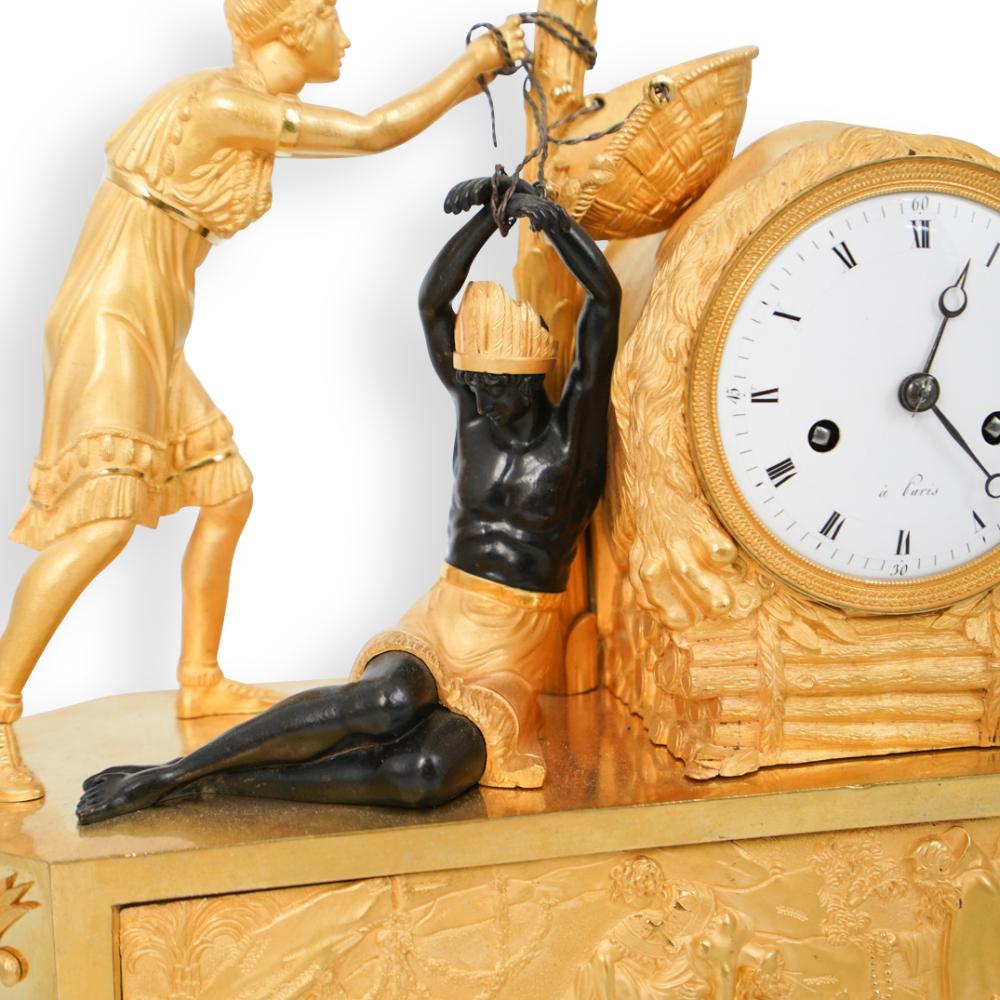 DESCRIPTION: This figural 19th Cent. clock features a round enamel dial, marked "a Paris", indicates the Roman numeral hours and the Arabic fifteen-minute intervals by means of two bronze hands. The clock is positioned within a gilt bronze casing mounted along the top with a scene of Atala Freeing Chactas. Has original Pendulum and key. Provenance: Purchased form Richard Redding Antiques Story: When FranÃ§ois-RenÃ© de Chateaubriand (1768-1848) published his epic prose 'Atala' in 1801 it was heralded a sensational success. Napoleon, who was determined to effect a reconciliation between Church and State welcomed the support it gave to his Concordat and in gratitude appointed Chateaubriand his First secretary at the French Embassy in Rome. The public adored 'Atala'. Between 1801 and 1805 eleven editions had been published and translations were published as far a field as Russia and Hungary. Chateaubriand's heroine, Atala inspired all forms of the arts, from ballads, paintings, engravings, wax works and as here clock cases. Chateaubriand's tragic story told how Chactas, a native Indian had been captured by a party of Muskogees and Seminoles who were going to burn him. He was tied to a tree where Atala, the Chief's daughter came to visit him. She was a Christian and filled with compassion and admiration for the captive she freed him. This part of the story is illustrated in the sculptural case above, with the hunter's weapons beside the clock and his fate, the burning fire surrounding the dial. Once freed they travelled North America setting up home with a missionary. Chactas was strongly influenced by Atala's faith and fell deeply in love. He asked her to marry him and though Atala loved him she could not, since her mother and later Atala herself had vowed that she would never loose her virginity. So rather than live without consummating her love for Chactas she killed herself. Chactas found her dying in a cave. On her deathbed Atala explained why she could not marry him. "To save my life [at birth] my mother made a vow: she promised the Queen of the Angels that to her, if I escaped death, should be consecrated my virginityâ¦.Fatal vow which hurries me to the grave!". The narrative is then continued on the plaque below. After Atala died Chactas and the missionary took her to be buried and as they walked a dog appeared. CIRCA: Early 1800s ORIGIN: France DIMENSIONS: H: 15.5: W: 12.5" Depth: 4.75" CONDITION: Great condition. See lot description for details on item condition. More detailed condition requests can be obtained via email (info@akibaantiques.com) or SMS (305) 333-4134. Any condition statement given, as a courtesy to a client, is only an opinion and should not be treated as a statement of fact. Akiba Antiques shall have no responsibility for any error or omission."""