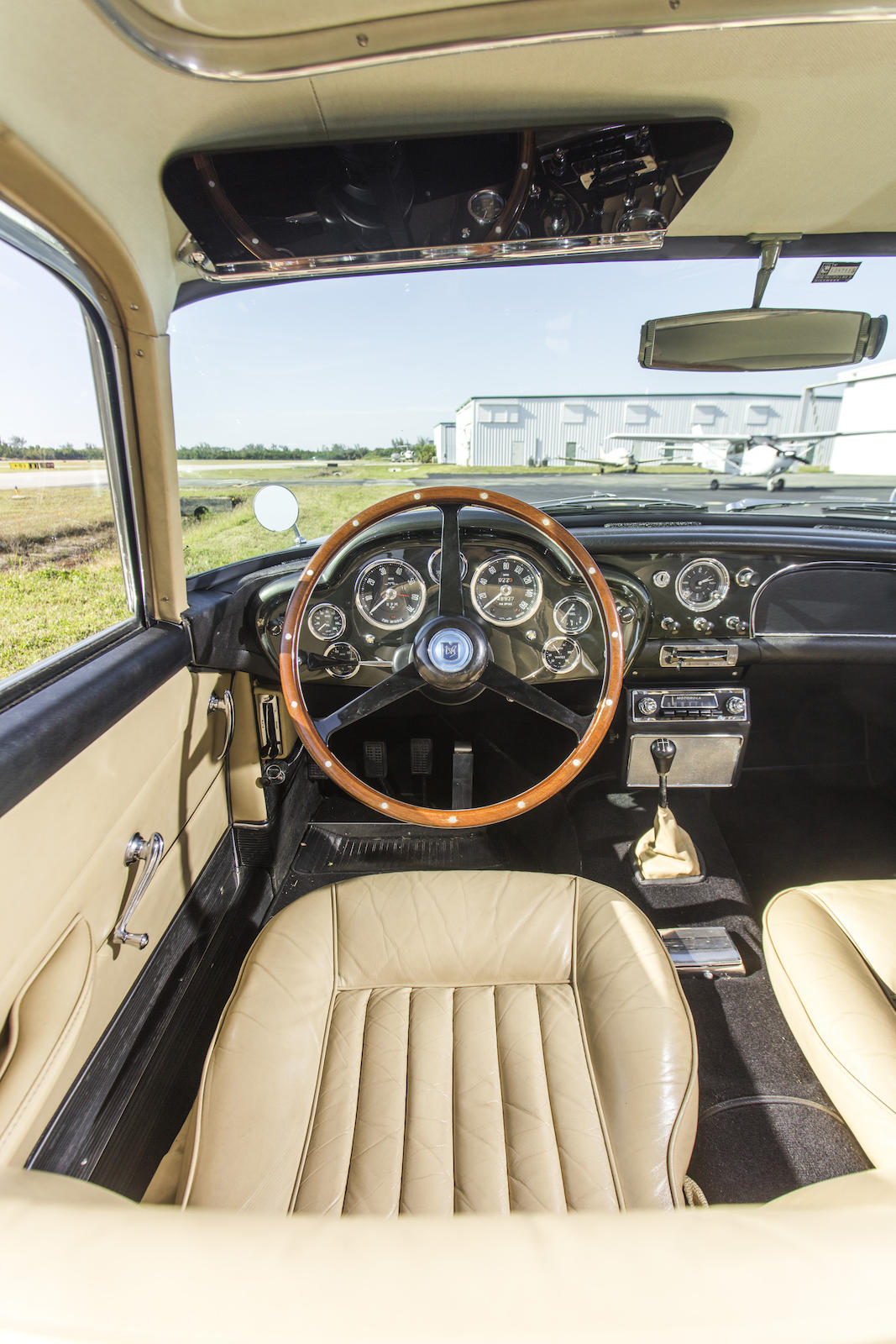 motorcars from the estate of dean s. edmonds jr. 1962 asto

Motorcars from the Estate of Dean S. Edmonds Jr. 1962 Aston Martin DB4 Series 4 GT-Engined Saloon Chassis no. DB4/836/L Engine no. 370/203/GT 3,670cc DOHC Inline 6-Cylinder Engine Triple Weber Carburetors 302bhp at 5,750rpm 4-Speed Manual Transmission Front Independent Suspension &#8211; Live Rear Axle 4-Wheel Disc Brakes *One of seven factory delivered left hand drive GT-engined DB4s built *The ultimate 'sleeper' car *In the Edmonds Collection since 1990 *High quality restoration now gently aged 'Performance, controllability and comfort have been combined in the Aston Martin DB4 to make it a highly desirable car: one in which long journeys can be completed very quickly indeed with the minimum of risk or discomfort and the maximum of pleasure.' - The Motor THE DB4 AND VARIANTS Manufactured between October 1958 and June 1963, the DB4 developed through no fewer than five series. However, it should be made clear that the cars were not thus designated by the factory, this nomenclature having been suggested subsequently by the Aston Martin Owners' Club to aid identification as the model evolved. The first series had already undergone a number of improvements, including the fitting of heavy-duty bumpers after the first 50 cars, before the second series arrived in January 1960. A front-hinged bonnet, bigger brake calipers, and an enlarged sump were the major changes made on the Series II, while the third series featured separate rear lights, two bonnet stays and a host of improvements to the interior fittings. The fourth series was readily distinguishable by its new grill, with seven vertical bars, shallower bonnet intake, and recessed rear lights, while the final (fifth) series manufactured between September 1962 and June 1963 was 3&#189;" longer (allowing for increased leg room and a larger boot) and gained 15" wheels, an electric radiator fan, and the DB4 GT-type instrument panel. With the arrival of the Series IV, a Special Series Vantage engine became available as an option. This unit, equipped with larger valves, raised compression ratio and triple SU carburetors produced no less than 266bhp at 5,700rpm, an increase of 26bhp over standard. Almost all DB4 Vantages, around 45 in all, were built with the faired-in headlights of the iconic DB4 GT, a feature that would be carried over the DB5. Along that journey, and towards the end of production a few DB4s were commissioned with the potent Weber twin spark GT engine, which bumped performance to 302bhp. Those who have experienced these rare cars almost universally praise them as the best balance of all in terms of all as they tend to favor the long wheelbase over the DB4GT and the purer Touring Superleggera looks of the DB4. The factory cites a mere seven to have been delivered in both this form and to left hand drive configuration. THE MOTORCAR OFFERED The Dean Edmonds DB4 is one of the 'lucky seven' examples to have left the Aston Martin works equipped with the uprated 'twin spark' engine of the GT cars, among other specifically tailored features. Its build sheet details its very rare, perhaps unique set up, which are listed under the heading of 'Particulars of Non-Standard Equipment'; those comprised: Overdrive, 2 Marchal Fog Lamps; Ace Silver Peak Number Plates; Chrome Wheels; GT Engine; Clutch and Oil Cooler; GT Inst. Panel with oil temp gauge; GT Silencers; GT Acc. Pedal; Wing Aerial; 2 Wing Mirrors; GT Pattern Rear Wings (fenders) with previous pattern tail lights; Dunlop Disc Brakes with dual master cylinders without servo. Colored in California Sage green and with a fawn leather interior, the car was both special and beautiful, as witnessed from this same guise today. The order came through Imperial Motors and was for the benefit of a M.R. Bogart of the wealthy Chicago suburb Glencoe, who would have received the car in early December 1961. Its subsequent history is not noted on the file, but it is not a car that is recorded as ever having traded publicly in its entire life. As elucidated elsewhere in this catalog Dean Edmonds love of automobiles stretched back to the 1950s, and he would recall that he had once visited the Aston Martin works in the early 1960s. Having been impressed by the styling of the DB4, he inquired of purchasing one, only to be told that the model was discontinued. But, said the enterprising salesman there was a new car, a DB5 which was a great improvement and he could assist him with an order for one of those. Dean was utterly unimpressed by the '4's successor, spun on his heels and left. Alas, Aston Martin had failed on this occasion. However, the instincts must have remained, and much later in life he started a quest for a good DB4, which resulted in the opportunity to acquire this extremely rare car. In a great twist of fate, the seller would only sell the DB4 as a pair with his other Aston, a DB5! So, a deal was struck. The '5' was quickly dispensed with and the GT-engined 4 would remain with Professor Edmonds for the next 2 decades or more. On its acquisition it was sent to RM Auto Restoration in Chatham Ontario for refurbishment. This work would continue over the course of the next couple of years, emerging in the factory original color of California Sage. In its latter years the car would be maintained in Naples by Manfred Krukow. When a small road incident saw damage to the driver's door, this was correctly and accurately corrected to both Manfred and Dean's exacting standards. Today, the Aston presents extremely well for its near 30-year-old restoration. This 'unicorn' example of DB4 production is the ultimate 'Q' or 'Sleeper' car and offers the very best of all worlds, in combination of understated aesthetics and trick performance together with that visceral exhaust tone.